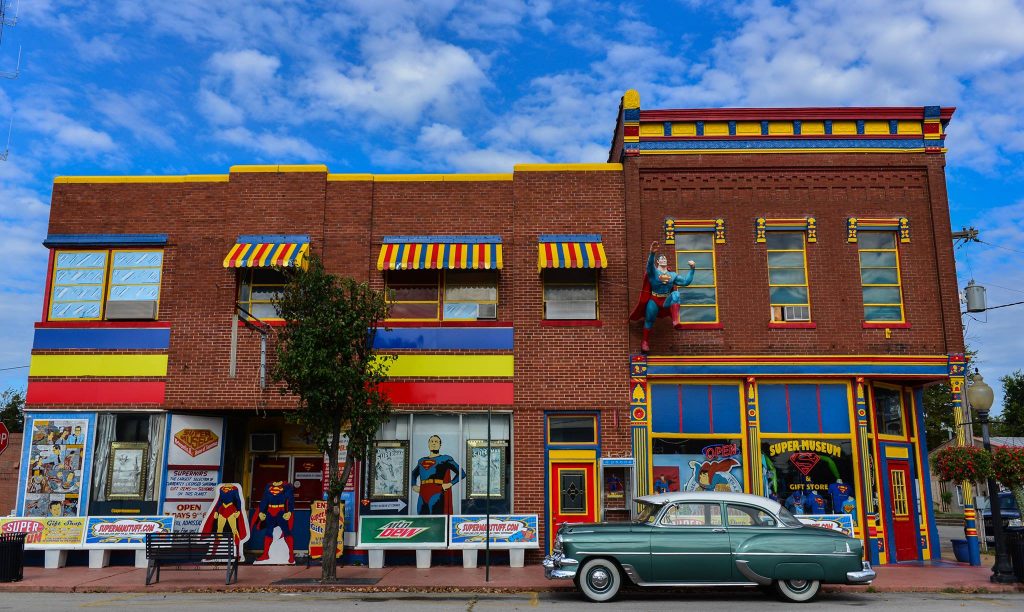 The Superman Museum’s colorful facade beckons visitors to take a peek inside. (Photo: The Super Museum)

Attention Man of Steel fans: did you know there’s an entire museum about Superman? Metropolis, Illinois (where else?) is home to the world’s largest collection of Superman memorabilia in the world.

It all started with a Superman lunchbox given to owner Jim Hambrick in 1959, when he was 10 years old. Hambrick has said that growing up in a single parent home, Superman was a surrogate for the father he never had – that the superhero gave him a sense of right and wrong from an early age. That lunchbox launched a collecting spree that has spanned nearly 60 years and grown into more than 100,000 items. Now, Hambrick owns the Super Museum in downtown Metropolis, a destination for loyal Superman fans that’s worth the pilgrimage to America’s Midwest.

The museum features more than 20,000 items at any given time. Hambrick owns every Superman toy ever produced, in addition to promotional materials from all the Superman movie and television series (including “Smallville” and “Man of Steel”), movie props, and one of the only George Reeves Superman costumes still in existence. Hambrick rotates the pieces on exhibit from his massive collection – which he keeps in a storage facility near town – to encourage repeat visits.

The museum is organized around particular eras and portrayals of Superman, spanning television, movies, and comic books. Key characters such as Lois Lane, Perry White and Jimmy Olsen have their own exhibits. Supergirl and Superboy have dedicated galleries.

From coffee mugs to action figures to boxer shorts to the the original comic book to the lunchbox that started it all, the Super Museum has an amazingly diverse array of memorabilia that will exceed any fan’s expectations.

The Super Museum has a store with Superman items and collectibles. Rare pieces of Superman memorabilia are available for purchase as well. There’s also an online store (supermanstuff.com) for fans who can’t shop in person.

Admission is $5 per person; children ages five and under are free. All major credit cards are accepted at the box office.

Bonus: The town of Metropolis hosts an annual four-day Superman Celebration with celebrity guests every summer. Hundreds of fans show up in costume. It’s a busy but fun time to visit this charming small town.