Chicago is undoubtedly a foodie city, but what if you’re not in the mood for fine dining? What if you really just want to sink your teeth into something sugary or all-around totally bad for you? 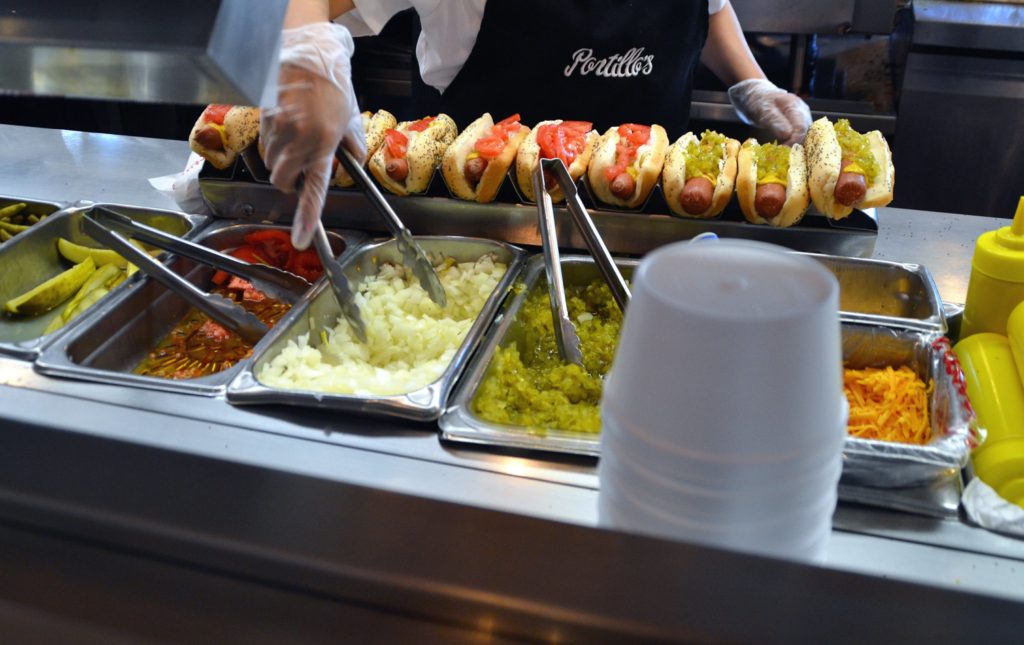 From Chicago-style dogs to donuts, Chicago has you covered when it comes to junk food (Photo: jpellgen via Flickr/CC BY-NC-ND 2.0)

Enjoying a city’s food scene doesn’t need to be all about fancy restaurants or world-renowned chefs (even though there are many of both of those in Chicago). Instead, try something a little indulgent and totally sinful the next time you’re in the Windy City. You may just uncover a few new favorite foods and guilty pleasures that you’ll want to eat again and again, every time you visit.

Portillo’s is a Chicago institution and it’s grown to open multiple locations around the city and in other Midwest destinations as well. Though there are some salads on the menu, the Portillo’s options are pretty high up there when it comes to calorie count — not that it’s a bad thing. Any Portillo’s fan will tell you that there’s not really anything on the menu that you can go wrong with. The Italian beef sandwiches and Chicago-style hot dogs are legendary, but if you truly want some top-tier junk food, get a chocolate cake shake. It’s been voted Illinois residents’ favorite guilty pleasure. It’s a thick ice cream mixed with chunks of solid chocolate cake. The secret ingredient that might make you think twice about ordering it (though you should definitely go ahead anyway)? Mayonnaise. 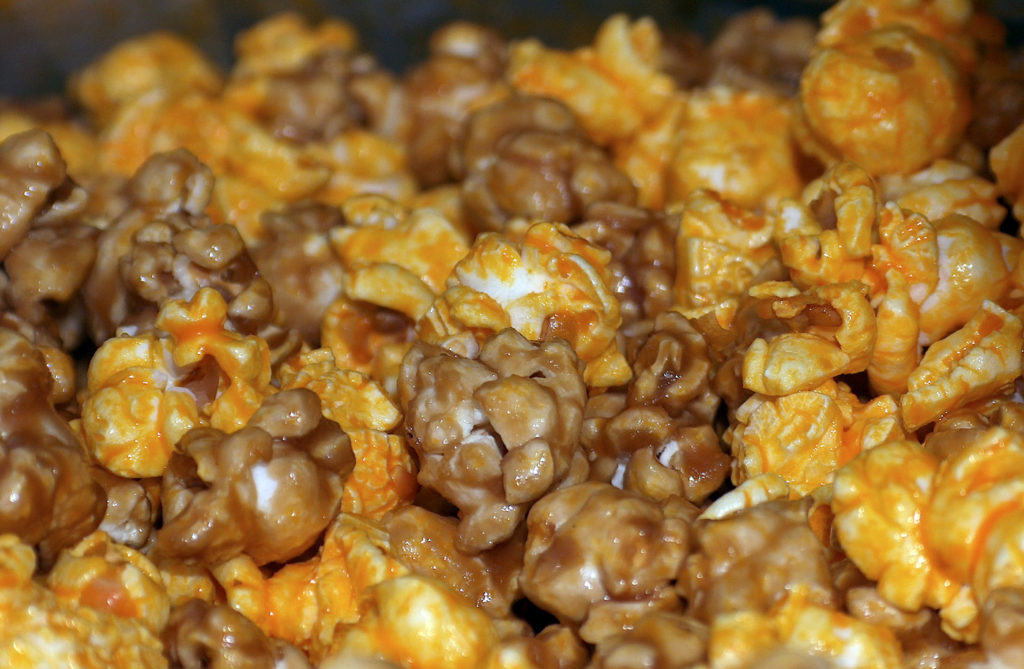 Even if there’s a line outside the door, fans say Garrett popcorn is worth the wait (Photo: Kimberly Brown-Azzarello via Flickr/CC BY-NC 2.0)

Garrett Popcorn Shops are pretty easy to find while in Chicago and it’s pretty easy to spot the Chicago shops’ fans as well. Just look for tourists carrying the iconic striped bags around the city. Garrett was always known for its “Chicago mix” of popcorn, a combination of caramel-coated popcorn and cheddar-coated popcorn. However, Garrett was forced to remove the “Chicago mix” name from its packaging and now you can find it under the name “Garrett Mix.” The most tantalizing popcorn option you can munch on, though, if that’s not enough for you? Try the sugary sweet Hot Cocoa CaramelCrisp Mix, for caramel corn mixed in with Belgian milk and dark chocolates, the perfect remedy for any sweet tooth. 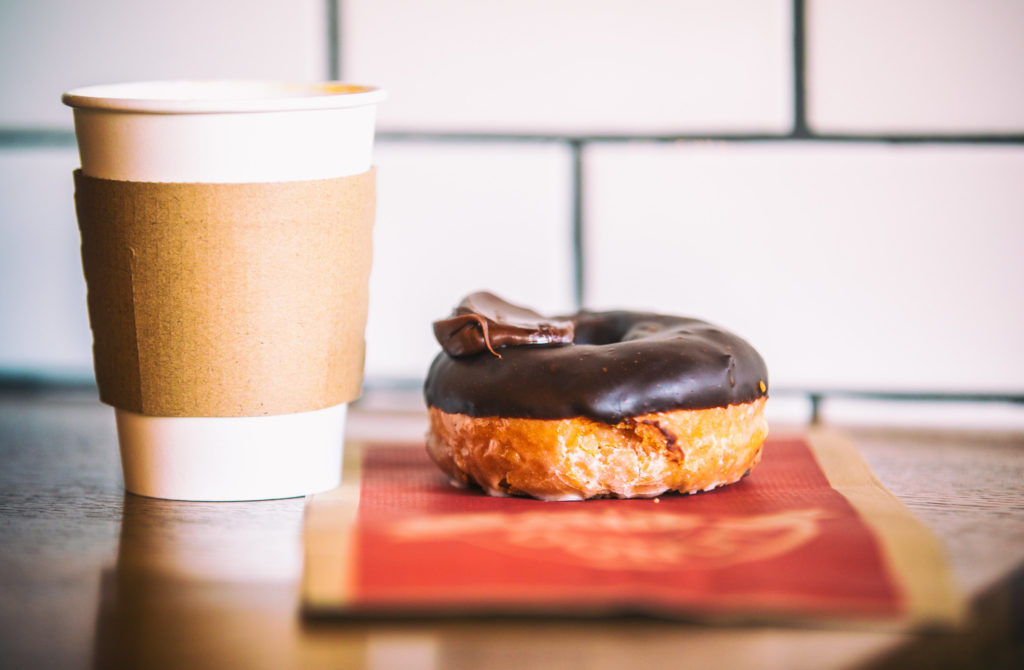 Donuts have gained quite the popularity among Chicagoans over the last decade or so. The best of the best when it comes to doling ‘em out is Do-Rite Donut. The favorited donuts on the menu are the buttermilk old fashioned with a vanilla bean glaze and the candied maple bacon yeast-raised donut, but you can take this junk food to the next level entirely by combining your donut with one of Do-Rite’s chicken sandwiches. You can make any of their chicken sandwiches into a donut sandwich simply by asking. There’s nothing quite like fried, crisp chicken, pickle, mayo and lettuce squished between two halves of a glazed donut. (Don’t worry — if you’re gluten-free or vegan, Do-Rite has options for you, too.)

If your junk food tastes lie in the way of all things candy, then you’ll be in heaven once you enter Amy’s Candy Bar. Vintage candies, chocolate, handcrafted confections abound. Whatever form your sugar takes, it’s a delight. There’s always something new for the season, too, such as the current pumpkin spice caramels and marshmallows, and the Belgian chocolate turkey Oreos. The crowd favorite are the candy bars, though, especially the S’mores candy bar, a real throwback to your childhood. House-made graham crackers are dipped in chocolate ganache and then topped with vanilla bean, toasted marshmallow and then dipped again in more Belgian chocolate. You’ll want to eat more than just one.

Fat Johnnie’s Famous Red Hots is famous for its hot dogs, and you should definitely get one, but don’t miss out on the other junk food that you’ll find here and really nowhere else in the country — the Mother-in-Law Sandwich. This one is for all the savory junk food aficionados. It’s a Chicago tamale (which, yes, is different from a normal tamale), placed inside a hot dog bun and then smothered in chili. This could just be your new favorite comfort food. 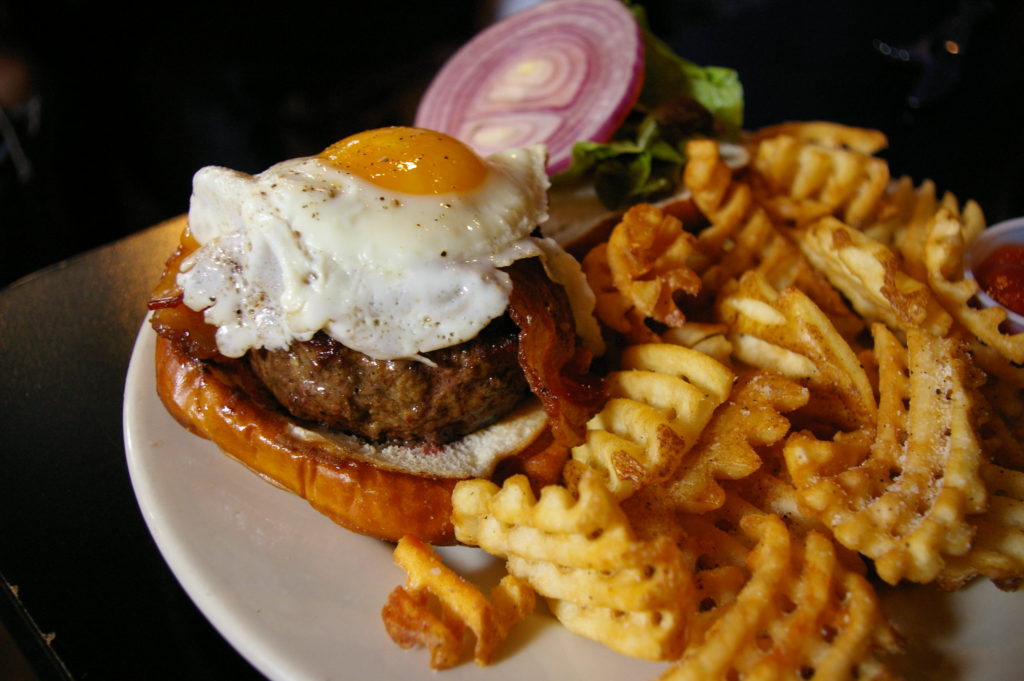 The giant burgers at Kuma’s Corner are decadent (Photo: Patent and the Pantry via Flickr/CC BY-NC-ND 2.0)